(a) Show that ~ is an equivalence relation (recall Exercise 3.29) on the edges.

A separating vertex is a vertex whose removal disconnects the graph.

(b) Partition the edges of the graph below into biconnected components, and identify the bridges and separating vertices. 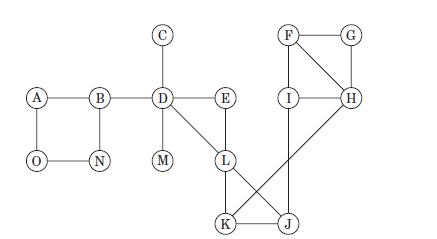 Not only do biconnected components partition the edges of the graph, they also almost partition the vertices in the following sense.

(d) Collapse each biconnected component into a single meta-node, and retain individual nodes for each separating vertex. (So there are edges between each component-node and its separating vertices.) Show that the resulting graph is a tree.

DFS can be used to identify the biconnected components, bridges, and separating vertices of a graph in linear time.

(e) Show that the root of the DFS tree is a separating vertex if and only if it has more than one child in the tree.

(f) Show that a non-root vertex v of the DFS tree is a separating vertex if and only if it has a child v′none of whose descendants (including itself) has a backedge to a proper ancestor of v.

(g) For each vertex u define:

Show that the entire array of low values can be computed in linear time.

be two edges and

is said to be congruent to

for the following conditions:

• If there is a cycle containing both

, by the definition of the given relation,

Thus, the given relation is obviously reflexive.

or there is a cycle contains

Since the given graph is undirected, either

or there is a cycle contains

is also true. That is,

Thus, the given relation is also obviously symmetric.

are present in cycle

are present in cycle

, then proof is over as

If not then neither

can be common to both cycles

, move in both directions on the cycle 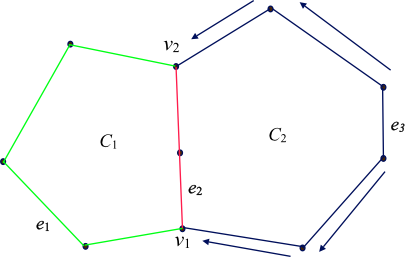 • Remove the path that does not contains edge 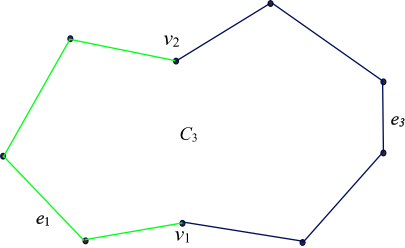 • On removing the red path, it results in a simple cycle

Thus, the given relation is transitive.

is an equivalence relation.

The equivalence relation(proved in part a) helps to partition the edges of the given graph as biconnected components.

Thus, the following are the biconnected components of the given graph:

• By the definition, a biconnected component by itself is a bridge. In the given graph

are the biconnected components by itself.

Thus, the bridges for the graph are

If a graph become disconnected on removing a vertex, then that vertex is called separating vertex.

Therefore, B , D and L are the separating vertices, because on removing these vertices from the graph, the graph becomes disconnected.

First, prove that two bi-connected components share at most one vertex(i.e. either one or none), by contradiction.

• So, there must be a path from

and one edge incident on

and some edges from

• It implies that an edge in

is related to an edge in

is a bi connected component, an edge in

. Thus, it is a contradiction.

Therefore, it is proved that two bi-connected components share at most one vertex.

Now it is required to prove that if two bi-connected components share a vertex, that should be a separating vertex.

be the edges corresponding to u in two components

• On removing the vertex u , if the graph becomes disconnected, the proof is over that the common vertex is separating vertex.

• If graph does not become disconnected on removing common vertex, then there must be a path between

that does not pass through

that contains one edge from

and another edge from

. This means an edge in

is related to another edge in

and an edge in

is related to another edge in

. This is a contraction.

Therefore, it is proved that two biconnected components share single separating vertex or none.

By definition, a tree is a graph without cycles.

Prove this by contradiction.

• Assume, after replacing each bi-connected component with a single meta-node there is a cycle in the resulting graph.

• This means that this cycle contains edges from two biconnected components. But it is impossible, because by definition, edges in one component does not related to edges in another component.

• Thus, it is a contraction.

• Assume the root of the DFS tree has only one child. This means that the root is a leaf in the graph. Removing the root still leaves the tree connected.

Thus, the root is not a separating vertex if DFS tree has only one child.

• Now assume, the root of the DFS tree has more than one child. The DFS (Depth First Search) from the first child(root) explores every reachable vertex along a path, which is not passing through the root. 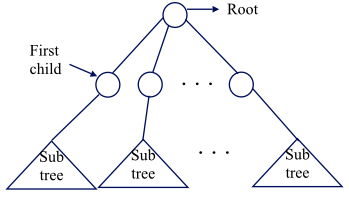 • As the graph is undirected graph, there will be no edges subtree of first child to that of any other child.

That is, a path from any vertex in the subtree of first child to any other vertex in the other sub trees of other children must pass through the root only.

Therefore, removing the root disconnects the tree, if the root contains more than one child.

A back edge is an edge drawn from a child to its ancestor.

• Assume v is a non-root vertex and

is its descendent. Also assume there is a back edge from descendant of

to an ancestor of

. This means, each child v can reach the entire tree above the vertex

, even though v is removed.

• That is graph is still connected after removing vertex

• Now, assume v has a child

. That means, there exists no path between ancestor of

• So, the graph will be disconnected after removing vertex

Therefore, it is proved that v is a separating vertex, if and only if descendants of v has a back edge to a proper ancestor of v .

Run DFS algorithm on the given graph.

• While exploring each vertex u, DFS looks at the edges like (u,v). where v is the neighbour of u. Save the pre(v) value for all neighbours of u at vertex u.

• Also, allow each child v of u pass its low value to the parent u when it is popped from the stack.

Since, DFS explores all the nodes, in a single pass of DFS the whole array can be computed. Also, it is known that DFS runs in O(|V|+|E|) time, which is linear.

Run DFS on the given graph as discussed in the part g and computer entire array low.

If u is a separating vertex, then it satisfies the following condition:

Thus, separating vertices can be identified while computing the low array.

If u is a separating vertex (i.e. pre(u) < low(v)), then the sub tree with v as the root must be in a new biconnected components.

• Maintain an extra stack of edges to store all the edges.

• While exploring a child v of separating vertex u, push an extra “mark” (to identify the subtree with root v).

• While exploring vertex v, push the edges of sub tree of v into extra stack.

• When DFS returns to vertex v and popped v from the stack, pop the edges (sub tree) stored in the extra space, till the “mark”. All these popped edges will be a new biconnected component.

• Also, it is known that if the biconnected components contains only single edge, that single edge will the bridge.